Graeme Cousing talks to Brian McGilloway, who is both an acclaimed crime writer and an English teacher.

Northern Ireland author Brian McGilloway may have missed out on the Theakston Old Peculier Crime Novel of the Year but his book which looks at the legacy of the Troubles was subject to high praise.

Chris Whitaker won the award on Thursday night with ‘We Begin At The End’ though Brian’s political thriller ‘The Last Crossing’ was also highly commended – in an unprecedented decision to recognise his “exceptional” novel.

Last week, before the winner was announced, the teacher from Londonderry had a chat with the News Letter about life as a crime writer, a teacher and a father. 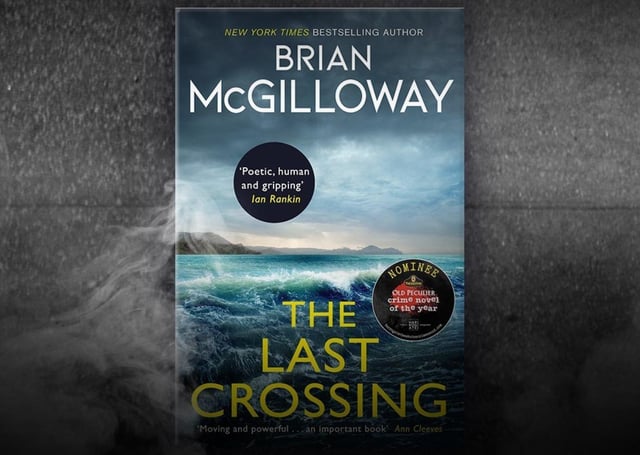 Brian believes he was born to write: “I think writing is a compulsion – it’s not a choice. I always had that drive to tell a story. Even when I was a kid I was writing long stories, making up wee books and stapling pages together.

“I wrote what I would consider to be my first full length book when I was about 20/21. I sent it to one publisher and they said ‘that’s not for us’. I put it in a drawer and haven’t shown it to anyone since.

“It was about two psychiatrists, one interviewing the other to work out whether he was actually insane or pretending to be insane. It came off the back of reading ‘Silence Of The Lambs’ and ‘Dracula’.”

He continued: “The most useful thing about it was the discipline of sitting down and writing every day, no matter how you feel. If you’re going to sit and wait for inspiration to hit you or to be in the mood you’re never going to do it. 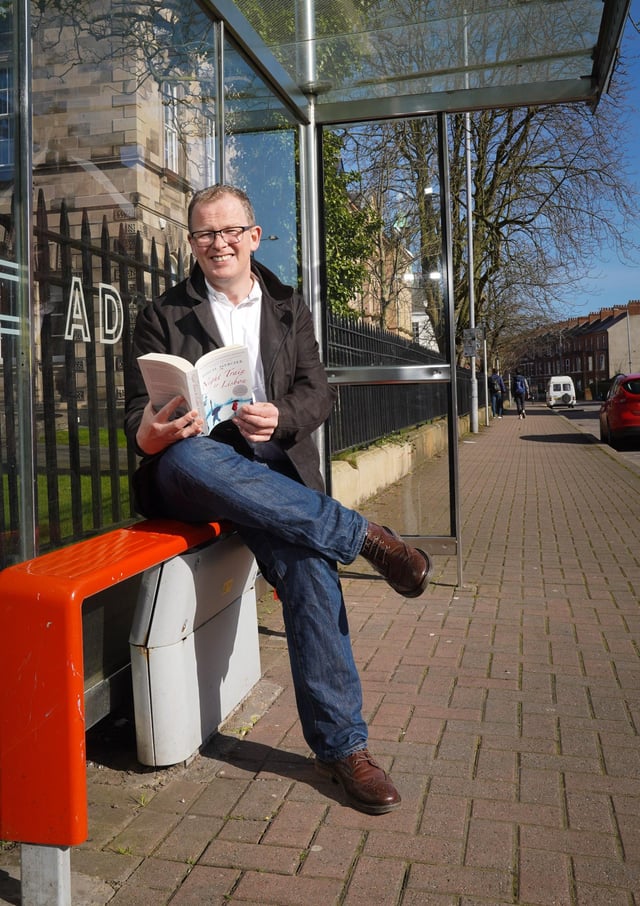 “You wouldn’t do that in any other job ... ‘yeah I don’t really feel like teaching today, I need to wait for inspiration to hit me’.”

He continued: “I would normally do about 1,000 pages a day. Eventually after about 80 or 90 days you have your first draft done. In fact it doesn’t always take as long as that. Next year’s book was the quickest I’ve ever written – I think it took about 40 days.”

‘The Empty Room’ – his 12th book – is out next March, but it is ‘The Last Crossing’ which is grabbing headlines right now, having found itself on the final shortlist of six for the Theakston Old Peculier Crime Novel of the Year.

Before that the 47-year-old father of four had carved out a name for himself in crime fiction with two series of detective novels – the Ben Devlin and Lucy Black books. 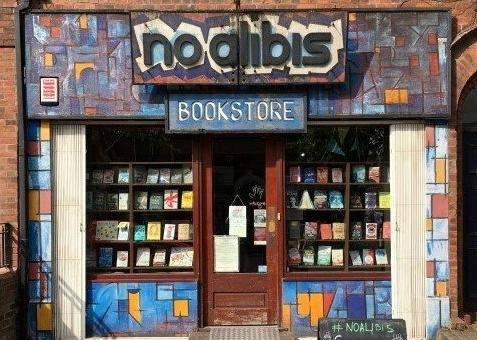 No Alibis bookstore on Botanic Avenue, Belfast is a hub for the crime writing community

He said: “They are both police procedurals – one set in the border area and one set in Derry. The main character is the police officer and it’s very much about the investigation – a whodunnit. Whereas in ‘The Last Crossing’ (a standalone novel) you know who did it because the book opens with them doing it.

“I suppose it’s a bit more of a whydunnit – why did they do it. I wanted to explore the consequences. You’ve these three characters who commit this killing at the start. They meet up 30 years later and each of them has responded to it in a different way.”

Asked about the sometimes graphic nature of crime fiction, Brian said: “I try not to be gratuitous with anything whether it’s violence or sex, particularly violence. People kind of wrongly think that people read crime fiction because of the violence, in actual fact I think they read it because of the sense of justice. The idea that people who have done bad things will face punishment for it eventually and people who have done good things will get some kind of a reward for it.”

Brian reasoned that the explosion in crime writing in NI was a result of the peace process and the passing of time: “I started writing Borderlands in 2002 so it was fairly soon after the Good Friday Agreement. 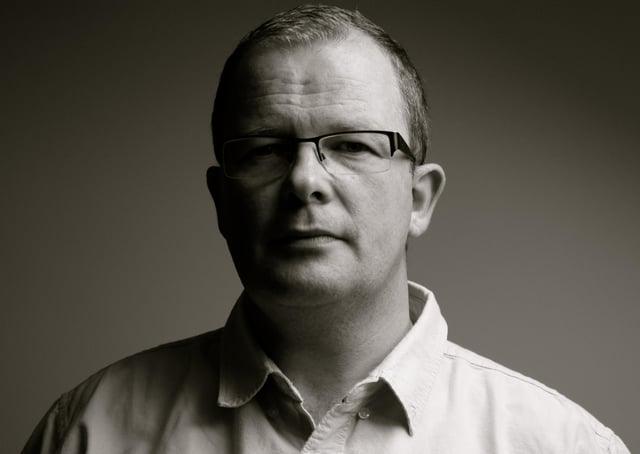 “Personally I can see why there probably wasn’t as much crime fiction during the violence, because crime writing is a vicarious experience of fear, safe in the knowledge that there is going to be some form of justice.

“You don’t need to have a vicarious experience of fear if there is real conflict. It doesn’t surprise me then that the stuff that was being written then was either by people not from here or else you had Colin Bateman who was writing it from a very satirical angle and Eoin McNamee who was writing true crime.

“I suppose there did need to be a bit of a gap before writers here started writing about crime head-on rather than approach it as an angle.

“I think it’s really important, really healthy, for us as a community to tell our stories and work out how we feel about things. The only terrible thing would be if we don’t learn from those stories.”

Crime community in Province are friends as well as writers

Brian said the crime writing fraternity in Ulster were a happy bunch of people who were not in competition with each other: “The strange thing is most crime writers I know are very happy people. Possibly because they’re getting all their badness out onto the page. It’s very cathartic.

“Writers, and particularly crime writers in the north, are trying to look back with a wee bit of distance now and look at what happened. There is a sense with crime novels too of a restoration of justice of some sort, a restoration of some sense of order. Maybe there’s a generation who feels those things are missing. The crime novel allows you to be able to reset order a little bit.”

“We’re all friends. There’s very little competition between local crime writers, simply because crime readers tend to read a lot. They don’t buy one book a year, it’s not like we’re all competing for that one sale.

“I very much have a sense that the rising tide floats all boats – the more that people read books set in Northern Ireland the better it is for people who are writing books set here. The sense that I get is that we all want one another to succeed because one person’s success will inevitably increase people that are reading Northern Irish fiction.”

Of his own rise to fame, Brian is very modest: “I remember one time I was sitting on the Tube in London and someone was reading one of my books. I think it was the first time I’d seen somebody out in the wild reading one of them. It was very nice. I didn’t say anything. Probably best I didn’t, they might have hated it.”

While the closure of Eason bookstores in NI was a big loss for local book lovers, Brian was pleased to report the opening of more independent bookstores

He said: “It’s an awful pity there are so few big bookshops now, but the other thing is we still have a lot of great independent bookshops – you have ones like Little Acorns and Foyle Books up here in Derry, in Belfast there’s No Alibis, which is a real hub for crime writing. You’ve also still got Waterstones.”

He added: “It’s great to see a couple of new independents have opened – Bridge Books in Dromore and the Secret Bookshelf in Carrick are two I know of off the top of my head.

“There is a gap in the market. The unfortunate thing is a lot of people buy their books in supermarkets where the range is quite limited. You don’t get too many new writers or backlist titles.”

He commented: “I know for a while there was a debate over whether the eBook would kill the physical book. To be honest I think it’s all nonsense – whatever form you’re reading in doesn’t matter. Personally I far prefer the book as an artefact, as an object, there’s something really satisfying about it.”

Asked if any of his books have ever been considered for a TV drama, Brian said: “Both series have at one stage or another been in development. The Devlin books are still trundling along, people talk about development hell, there’s a really strong script for the first Devlin.

“Little Girl Lost (the first Lucy Black book) was being developed but time and TV tastes change, the police procedural was really fashionable for a while then it has gone out of fashion. At some stage it will probably come back into fashion again. We’ll see.

“That kind of stuff is beyond my control. Even when you’re writing a book you’re not thinking this could be adapted for this, that or the other, you’re writing it as a book and you want to make sure it works as a book.

“If it’s adapted as another form, that’s great, and it gets you a bigger audience maybe for TV.

“As a writer your obligation first and foremost is to the reader.”

Brian returned to teaching at Holy Cross College in Strabane having taken a hiatus from the profession to concentrate on his writing.

He had previously taught for close to 18 years at St Columb’s College in Londonderry, a school which nurtured the literary talents of both Seamus Heaney and Brian Friel.

He said: “I took a sabbatical but I kind of missed the kids, I missed the balance.

“I’d got myself into the habit of doing 1,000 words a day – I tend to do it in about an hour and a half. Whenever I took a break I thought I was going to write far more, but I found once I got my 1,000 words done my itch was scratched – I didn’t feel any compulsion to write any more. I wasn’t hugely more productive whenever I gave up teaching and I missed the social aspect of it, talking about books to kids, introducing them to great books for the first time.

“I tend not to talk about my own books to the kids per say. I’m aware that they are adult books. If they ask the process of writing, or a career as a writer or being published I’m very happy to talk about that.

“I’m lucky to be doing two jobs that I love.”

He said: “They’ve crept into the books as Lucy Black and Ben Devlin. Tom is Lucy’s boss, and there’s a pathologist called David as well so they’ve all kind of got their names in there somewhere.”

Brian is incredibly supportive of his fellow Northern Ireland crime writers while further afield he is a fan of Ian Rankin and John Connolly.

There are no comments posted here yet